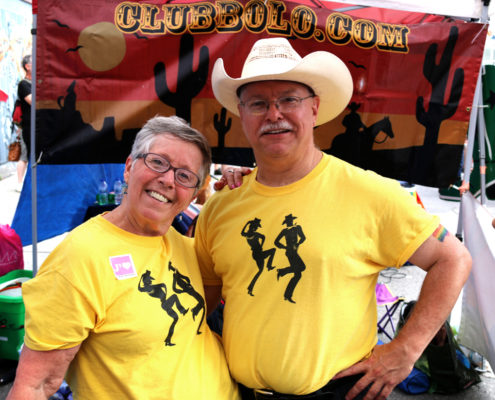 Management and administration of Club Bolo Danse Country Montréal have been the exclusive responsibility of Alain Dansereau and Alan Gaudet since May 1996. Persuing their work, they have put the emphasis on the community orientation and non-profit aspect of the organization. With Alain and Alan’s initiative, Club Bolo has put together a Board of administration in May 1997. Alain Dansereau and Louise Houle respectively held the chairs of President and Vice-President. Louise’s involvment has brought the lesbian community a significant exposure to Club Bolo. In 1998, Club Bolo also became through its President a member of the Quebec Gay Chamber of Commerce. In the same year our vice-president also made Bolo part of the Lesbian Professional and Businesswomen’s Association. As of our our May 1999 election, Mr. Richard Rattey is now occupying de seat of vice-president and M. Dansereau has taken on another mandate as President.

Club Bolo’s mission is to provide a social activity mostly for the Montreal gay and lesbian community. Its implication also bears a broader social aspect by part taking in Community events such as the Fahra Foundation’s “ÇA MARCHE”. Club Bolo is the only gay country club of its kind in Canada. We are very proud of our achievements and wish to share with everybody our passion for country dancing as well as helping the community.

When we first started in 1994, we had about 30 members. Five years later, that number has risen to over 200 members and membership is still growing.

In July of 1997, in Boston, Danse Country Montréal has joined the International Association of Gay and Lesbian Country Western Dance Clubs. An association that caters to dance clubs that share the same orientation.

Club Bolo also has its dance demonstration team that came to life in 1994 under Alain Dansereau’s supervision. Perfomances are given regularly as well in the heterosexual and gay community. The Group has performed among other places in Syracuse, N.Y. in 1995, Boston, Mass. in 1997, Fort Lauderdale, Fla. in 1998. It is also present in several fund raising events and also in numerous television shows.

CLUB BOLO DANSE COUNTRY MONTRÉAL strongly believes in assisting the community and as a result a portion of all revenue raised at our special events are distributed to non-profit organizations in the community.